Pandorea (Pandorea) is a perennial shrub that retains a year-round green color of leaves. The variable names of the plants are considered to be tecoma and podranea. The shrub belongs to the family Bignonieae. Pandorea lives in tropical areas of Asia, Australia and Africa. In European countries Pandora shrub is grown only in home.

According to various sources, the genus contains 6 to 8 species of flower. Cultural types is pandorea jasminoides, of Ricasoli and Variegata. The last member allocated is rich variegated coloration of the leaf blades.

Pandorea was named after the mythical creation of Pandora, whom Zeus had bestowed the divine gift. Soon, the woman drew the box. He couldn’t resist and opened it, Pandora did not even know what troubles will bring down on the people on the ground. When the woman slammed the casket at the bottom remained only Hope. Since that time, Pandora means «gifted».

Description of the plant of pandorea 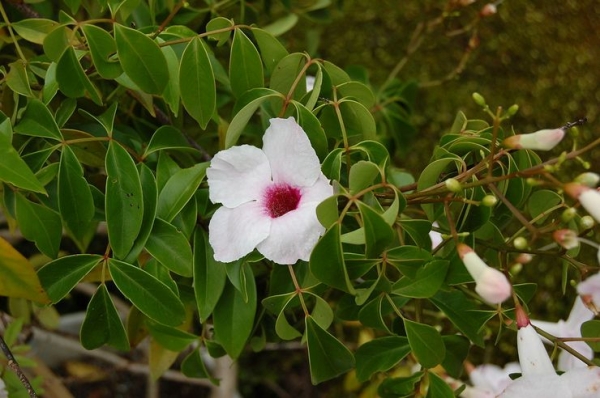 Wild stands of bindweed pandorea can grow three meters long. Every year the shoots lengthened by 20 cm the leaves of the plant are oval and sharp ends. Pinnate leaf blades painted in dark green tone. The light reflected by the surface of the leaves is glossy. During flowering, spreading Corolla-funnel with petals of various colors bright and expressive mouth.

Plant lovers of pandaria attracted by the fact that shrub has long abundant flowering, which begins in February and ends in July. Some types of pandorea able to blossom again. The opened corollas emit a wonderful aroma. Care pandorea at home is not difficult, it is necessary to observe a few rules. Pots with shrub, it is better to put in a well lit room near Windows with East or West direction. On the South side, where at noon there is an excess of hot sun flower pots brighten or placed away from the window. In winter, the plant needs additional artificial light. The plant needs moderate soil moisture. The excess and stagnant water close to the roots leading to rotting process. As soon as the topsoil dries, you can begin regular watering. In winter, the water demand is reduced, but the full drying earthen coma detrimental impact on the growth of the shrub.

For irrigation pandorea use only filtered or pooled water. The rain water will saturate the roots.

Air of constant humidity of 60% is considered a favorable environment for the development of vegetative parts of a flower. In the summer it is important every day to spray the leaves with a spray bottle and keep the pots above the trays containing damp moss or pebbles. 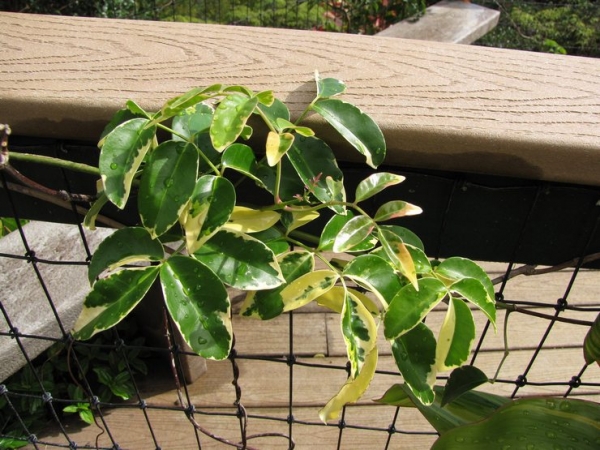 The tops of the shoots from time to time pinch, then the seedlings will begin to custimise. Withered stems pandorea cut by a third.

Every year, the bushes are transplanted pangorei with the arrival of spring. For this purpose, suitable wide and deep pot. The bottom line drainage containing expanded clay, pebbles or small stones. The pot is filled with loose breathable soil. Can be mixed in the same ratio of sand, compost and perlite.

A glut of soil moisture causes the development of putrefactive processes. If the root system starts to hurt. You should immediately transplant Andrew in the pot with new soil. Diseased parts of the shrub are cut. Аnd the wound treated with fungicide solution, also decontaminate the soil.

Often pandorea infected with chlorosis, in which impaired photosynthesis. The cause of illness is malnutrition and impoverishment of the soil. To grow perennial using seeds quite easily. However, to rejoice in the flowering of your plant pet only a year after planting pandorea. Seeds are sown in boxes filled with peat and sand or any other compound recommended for indoor flowering perennials. Seeding depth of not more than 1 cm Seeds spread over the surface of the soil and slightly pressed. The soil is sprayed with water through a nozzle.

To create conditions like greenhouse, crops covered with glass or polythene. Crops are regularly aired. Store at room temperature and under diffused light. Regularly water the drying of the upper soil layer.

As soon as the seedlings appear, remove protective cover and stand container in a room with temperatures around 20°C, then the sprouts will develop evenly and not stretch. After forming a couple of strong leaves, the seedlings are transferred to different pots.

Reproduction the vegetative pandorea way less successful than seed. For grafting is in spring, harvest the renal apical shoots, the length of which should be 10 cm Stalk to accelerate the growth process stimulant and deepen in the sand, smeshannyi with perlite loose and fertile land.

Containers of cuttings are placed under a jar or bottle. In the process of rooting adhere to the standard parameters of temperature and lighting used in the seed method. When the cuttings will grow green leaves, they are transplanted in new pots.

The types and varieties of pandorea with photos

The plant has a thick, durable leaf blades that resemble your shape of a cherry tree. Flowers elongated, like a tube. Are formed in consequence of the loose inflorescence-panicle. This perennial blooms with buds, painted in yellow or pink tone, which depends on whether the varieties. 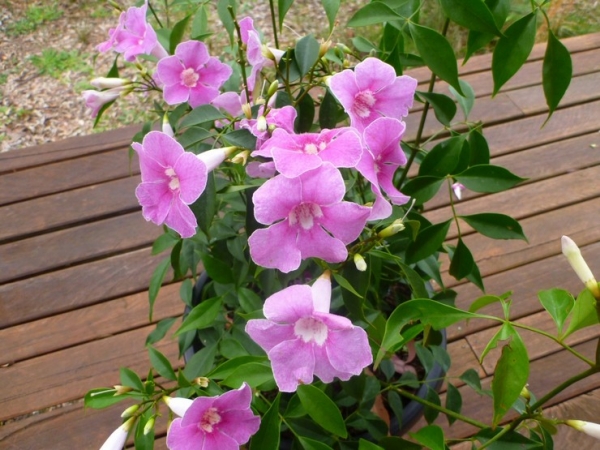 One of the most attractive types of pandorea characterized by long lush blooms. Fragrant blossoms reminiscent of Jasmine, which determined the name of. Long lanceolate leaves are arranged in opposite order. 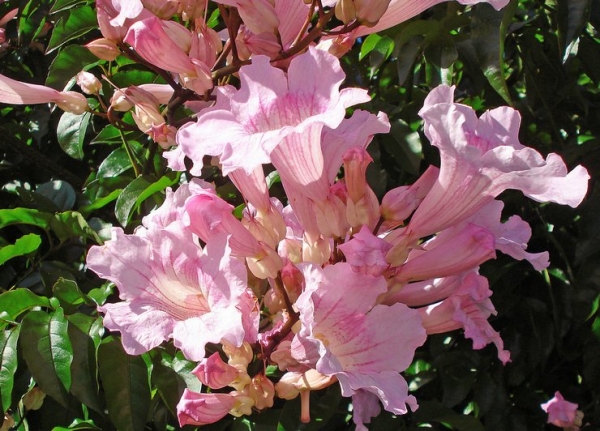 No less decorative look of a perennial with a massive fluffy brush, like the craters of mallow. Each inflorescence is 30 to 50 crowns.

Proper planting of cedar seedlings in the garden