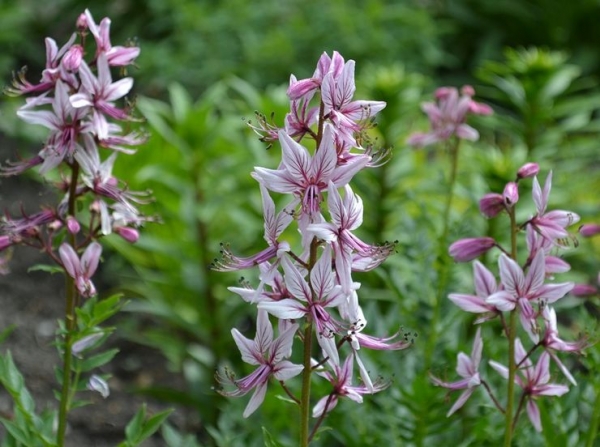 Fraxinella (Dictamnus or Yasenets), or the burning Bush, or wild anise, or dictamnus, is a perennial flowering plant of the family Rutaceae. Wild species of fraxinella deserve special attention of gardeners because of its high resistance to adverse conditions. Lets speak about Beautiful Fraxinella in the garden!

Fraxinella  distributed in the middle latitudes, where the climate is mainly moderate. We are talking about Western European countries, Russia and the Caucasus. The flower has a strong root system. In the natural environment perennial grows in calcareous rocky areas mainly in the penumbra cast adjacent to nearby shrubs.

For the burning Bush characteristic bushy frame. The plant is growing rapidly and flooding the space around, turning into impenetrable thickets. Survivability and spectacular appearance of the wild anise attract many gardeners. Therefore, culture can often be seen in suburban areas. 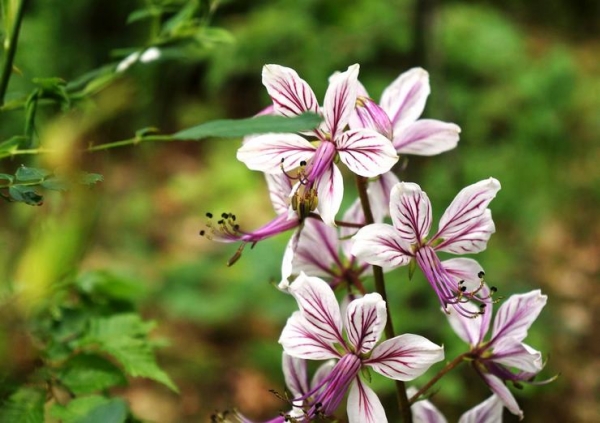 Fraxinella refers to the group of perennials. Its height reaches up to 1 meter in the wild. The name of the plant received due to the specific dark green color of leaves. Leaf blades have a greater similarity with the foliage of the ash. The popular nickname «the burning Bush» is also easily explained. So the fact is that if you throw branches of fraxinella in the fire, the plant is actively burning, but never burning to the ground. The secret of the unusual properties of the flower is hidden in the essential oils contained in the composition of fruits. Worth a close match to the shoots as the plant immediately ignited. In addition to «burning Bush» to the culture you often hear «wild star», because the flowers and fruits appear in the form of stars, which resemble seed pods of star anise present.

If there is favourable weather, fraxinella blossoms in early summer. Phase lasts until mid-July, then the maturation of the seeds. Colouring of inflorescences varied. There are bushes with pink, white and Burgundy stars-flowers. When open they give off a pleasant citrus aroma that attracts insects around the garden. In place of the pollinated buds formed fruit.

Wild shape without problems grow on rocky substrates. The plant takes root even in the barren rocky slopes, to hide in a crevice or to grab the stone. Cultivars Seneca allowed to disembark in the usual poorly fertile soil. Perennial propagated by standard methods, namely by seeds, cuttings or division. 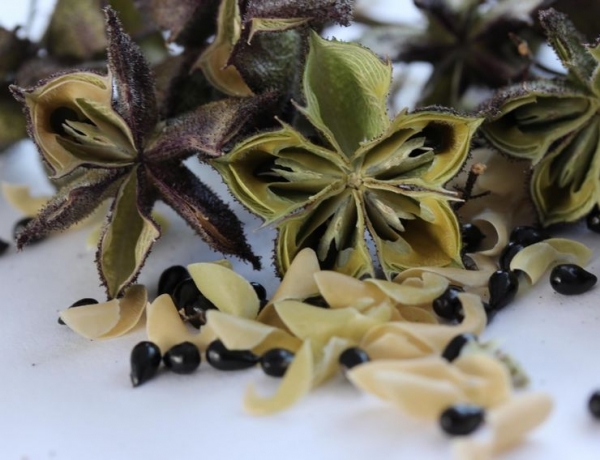 Collected fruit seeds are immediately sown in the soil. Long-term storage of seed is bad for germination. However, when there is no possibility to make operational the planting, allowed to postpone the event until next spring or autumn. Only in this case, the seedlings will germinate earlier than in a year. The flower is a function of self-seeding. If the owners do not wish to see on the plot thickets of wild anise, it is necessary to pluck the fruit to the moment when the wall will be revealed.

To the choice of location culture are treated with the utmost care. Better prepare to flower beds quiet area, hidden from prying eyes and protected from the wind. The soil is dug up and dumped on top of the ridge seeds.

Overwintered seedlings with the arrival of spring warmth thinned. Between the young fledgling plants leave a distance of at least 20 cm is deposited at the same time the extra bushes that thicken landing. After 3 years of grown up bushes is deposited on another plot where a flower can grow on a permanent basis. Time to collect seeds, take into account the climatic characteristics of the region where you plan to grow the culture. If you miss the time of aging, there will be a self-seeding perennial.

Wild star anise is propagated through the division of the Bush. The best time for the event is the period when the flower activate all life processes, namely, spring or summer. To carry out division, the rhizome is recommended to dig in cool weather when the sun hides behind the clouds.

Pre-prepare the hole. They have to meet only one requirement – between the bushes should be a distance of not less than 50 cm In an otherwise dense planting will interfere with each other. Finish transplanting the abundant watering. While divided plants fully adapt them regularly to moisturize. When the root system is stronger, and the shoots will rapidly be extended, reduce the amount of moisture. Excessive moisture of the substrate faces the roots of infected rot.

The division of rhizomes is the most common method of reproduction.

Gardeners almost did not encounter problems in the development of the flower. The bushes in the speed of the bloom and during the first two months of the summer garden is decorated with colorful buds. However, if you do not follow the rules of care, and risk to get sick or die.

Sometimes gardeners is framed by a bed of wild anise stones. The day the sun’s rays heat the surface of the stones, and at night this heat is returned to the flowers. Experienced breeders suggest as a plot for cultivation to choose the Western or the southern direction in the garden. The bed should be well illuminated by the sun. Allowed a slight darkening of the ridge.

Propagation is through cuttings

Another alternative method of reproduction Seneca – cuttings. However, the effectiveness of this method leaves much to be desired. Only one rooted cutting that is sliced at a certain angle. In the process of rooting in a container of segments systematically pouring water. To stimulate the emergence of roots, slice moistened with a special tool. Harvested cuttings in the spring time vegetation. Cuttings are cut 10-15 cm long, the Rooting is carried out mini-greenhouses. Or use for these purposes a glass jar.

Contacting parts of the plant necessary to take care of the protection to hands and eyes have not got a drop of juice. Inhale the scent of the blossoms is quite dangerous to humans. After transplanting or trimming bushes hands and face immediately washed with water. Juice of leaves and shoots of fraxinella leaves the skin reddening and burns, so culture is considered to be poisonous. Planting with flowers placed in a place protected from children and Pets. Some growers say that after interaction with the leaves or flowers perennial of the described temperature rises, there is a weakness, and dizziness.

Growing Seneca is straightforward, if you follow the advice of gardeners and successfully choose the time for the procedure. Eventually replanted Bush will be a long time to decorate the garden spreading flowering shoots. 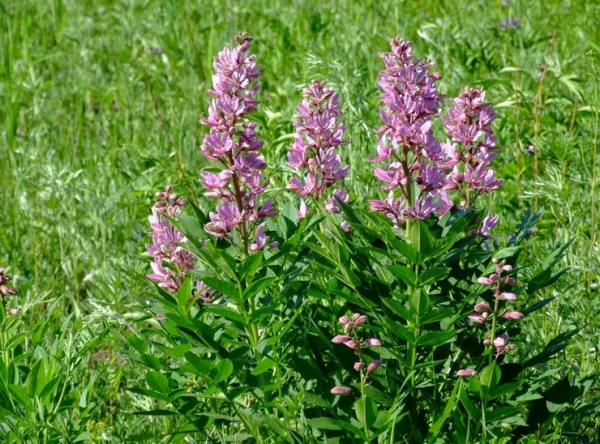 Despite the visual appeal, the appeal with asenaca should be very careful. Inexperienced growers often do not even realize what a potential threat is a culture. The influence of toxic substances contained in the plant tissues, is more prominent in the hours of sun. Therefore, in hot summer weather should not be touched with bare hands to the leaves. If burns could not avoid, reddened area of the skin washed with water. The wound heals after a few days. Beautiful Fraxinella in the garden!

Fraxinella is not pretentious to care. During the first year after sowing wild star anise, like all perennials need regular watering, fertilizing, and proper lighting. Proper growth of the bushes can be achieved if to take care about the composition of the soil and convenient location in flower beds.

In natural conditions the burning Bush climbs on Sunny hills (cliffs, mountain ranges) or hiding on the outskirts of the forest. Shrubs adapted to live in shaded places, for example, among the thickets of woody vegetation. If you have the opportunity, for the cultivation of fraxinella on the site it is advisable to choose a bright place, then perennial will bloom profusely.

Fraxinella is developing steadily in loose substrate leaky. Because in the wild the plant prefers the meager soil, the presence in the soil of a large number of nutrients only slows the growth of the root system. Flowerbed systematically loosened to get rid of the weeds that create a water deficit and shade the young crops. Fight with weeds and helps the soil mulching. As mulch is peat or straw.

Fraxinella is not tolerate excess water in the root zone. So hydration is important not to overdo it. In conditions of prolonged drought watering organize more than usual. The demand for water especially faced by young crops. To enhance rooting, seeds need moisture. Adult specimens are not so sensitive to interruptions in watering. Culture is considered to be drought-resistant. The rhizome stores the necessary amount of moisture and helps the bushes to survive the dry period.

Make feeding twice during the season, while the shoots kept inflorescences. Growers are recommended to apply universal fertilizer, which provide the seedlings a balanced diet. Yasenets without additional fertilizers. In a poor sandy soil, the root system does not feel less comfortable. However, lush flowering under such conditions is not expected.

Growing dictamnus on the plot simple enough exercise. Culture is not in need of shelter for the winter. The bushes are easy to cold. Diseases and pests not afraid to Fraxinella. Immunity to disease is due to the presence of poisonous toxins in the plant material. Weeding is rarely satisfied. If you take the time to mulching, you can not worry about loosening in the future. Most weeds, like insects, due to the toxic properties of the vegetative parts of the plant go around the side. Flower bred mainly for decorative purposes.

Beautiful Fraxinella in the garden 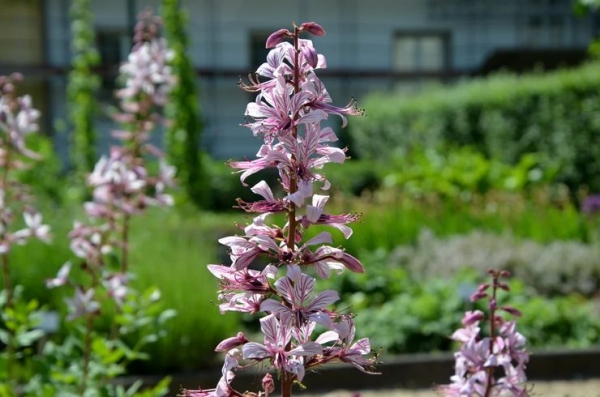 Before you engage in the cultivation Seneca, choose the most favorable place in the garden. Take into account the main characteristics of the plant, namely, the buds have a strong aroma, the leaves and branches are poisonous. A flower bed, you can break away from the benches, walkways, recreation areas, where they like to run around children and Pets. This aromatic shrub is better to knead in the back of the garden where it will look even more attractive.

The bushes transplant is very rare. In one place the culture is able to grow over the ten years. Vase life the flowers will remain fresh for about 4 days.

The beneficial properties of fraxinella

The healing properties of the roots of fraxinella. Harvesting the roots are doing in the beginning of spring or the onset of the first frost in the fall. Rhizome extract from the soil, shake off the adhering earth and washed under water. Then lay out in the sun to evaporate the moisture. The dried rhizome is cut with shears into strips that pour out on paper or a baking sheet. Before dealing with the plant, wear gloves and cover bare skin. Raw materials are sent to douchka in the oven, or leave the process to continue in a dark place. For the storage of finished raw materials use paper bags. They are marked, not to forget about the poisonous flower.

Medicinal properties of the leaves and shoots of the fraxinella. The tissue contains many essential oils and other useful elements. Harvest the above-ground organs in summer. Dried in the same manner as roots.

Based on vegetable components of the burning Bush to produce various ointments, infusions and decoctions.

Beautiful Fraxinella in the garden!

The dried roots are crushed, add the petrolatum in the ratio of 1:20. This mixture was incubated for days, then store in the fridge.

The recipe for the brew

1 tbsp. of vodka take 1 tsp powder of dry roots. The components are thoroughly mixed and poured into the bottle. Insist the drug a couple of weeks in a closed Cabinet. Drink 40 drops 30 minutes before meals, pre-strain.

Drugs of dictamnus used only in consultation with your doctor. They are also effective in the treatment of diseases related to urinary system, gastritis, sciatica, eczema, mastitis, cervical erosion. Extracts used as sedatives. The plant is widely known among representatives of non-traditional methods of treatment.

Beautiful Fraxinella in the garden!