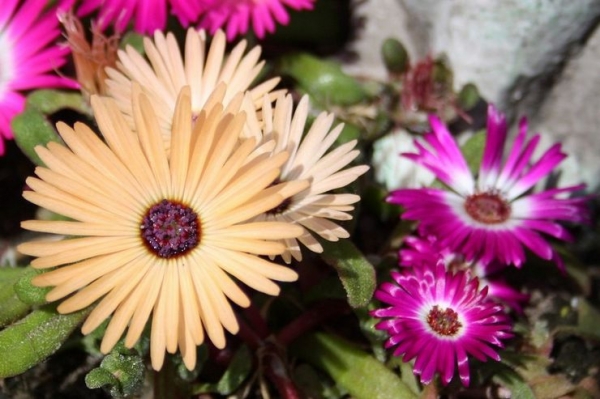 Dorotheanthus (Dorotheanthus or belidiformis Dorantheanthus) is a perennial succulent plant from the family of Isovue. In open soil it is grown often in the role of the annuals. At home, succulents can live for many years. The genus comprises about 20 species.

The birthplace of dorotheanthus are the countries of southern Africa, where year-round dominated by the dry hot climate. This plant is suitable for cultivation in the regions of the middle latitudes. The lack of rain, warm and Sunny weather – the main habitat of the perennial. In cold climate areas increases the risk of death culture.

From the Latin dorotheanthus translates as «flower of Dorothea». The name Dorothea belonged to the mother of the famous scientist G. Swantek who discovered color. More common people in the name of «crystal Daisy». The leaves and flower shoots covered with small glandular hairs. Under sunlight the fibrous covering crystal emits a bright light.

The address of dorotheanthus you can hear also «polygenic» that characterizes the ability of the perennial to reveal blossoms only at noon, when the sun appears at the top of the horizon. After lunch, the cups begin to roll up slowly. If the bushes lack of light, for example, in cloudy weather, the buds will probably remain hanging on the stalks in a closed form. 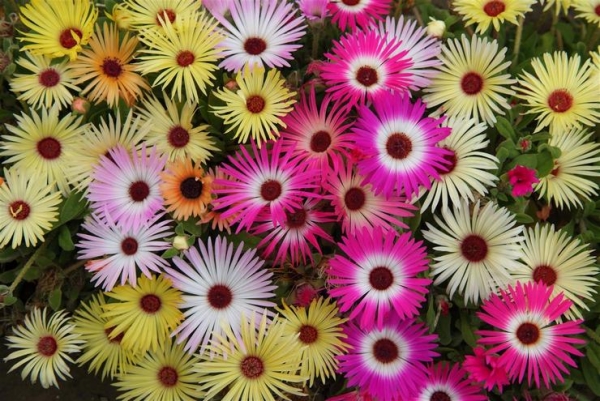 The root system submerged in the soil at 20-25 cm, fibrous type. The bushes grow to a length of 5-30 cm depending on the variety. Stems fleshy structure stelyutsya on the ground and carry dark green foliage. Often the leaves shimmer with an emerald hue. Shoots are located closely, thereby forming a thick green carpet. On the woven stems sticking sessile oval leaves. The thickness of the lamina varies in the range of 20-30 mm. the Leaves tend to nakalimot moisture, so the rain of the plate can be thicker than usual.

Blossoms resemble daisies or camomile. The petals varied. There are yellow, white and red flowers. Buying a packet of seeds, we can not guarantee for sure that bushes will grow only a single color. There are over 12 shades of culture. Bud holds its shape for two days, then it fades, giving way to the next. Many buds have a diameter of about 5 cm, depending on the climate and the varietal identity and flowering periods of different perennial. Most species of dorotheanthus bloom in mid-summer. In October-November, the bushes lose their buds. Do not expect abundant flowering, if the forecast is rainy and cool summer. 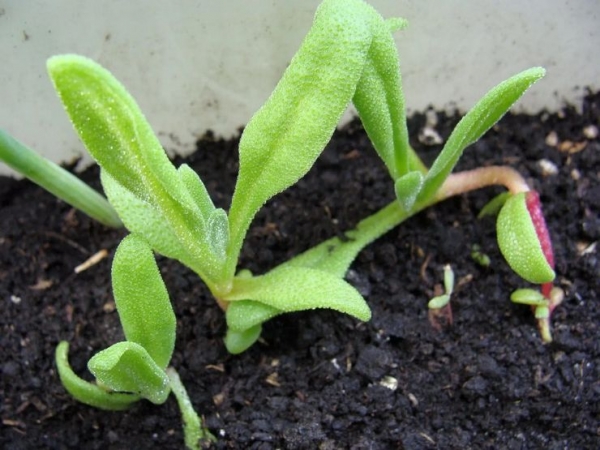 In place of wilted buds of dorotheanthus Mature bolls with translucent walls. Is stored inside small rounded achenes. One gram of seed contains up to 3 thousand seeds that can remain viable for several years. Carry out sowing seedling method or skip this stage and immediately sown grain in the open ground. Consider the features of the cultivation of dorotheanthus seedlings.

Favorable time for sowing of dorotheanthus – March or early April. By the time of transplanting to the area bushes will bloom. Select the rectangular roomy capacity. Filled with a loose substrate, for example, a mixture of peat and sand. Light soil provides the best air and vodopronitsaemosti.

The substrate is spread on top and distribute the seeds. They do not need to dig deep. The crops are sprinkled with water and covered with plastic or glass. Leave the film as long as the seedlings will not appear above the surface. Under favorable conditions, plump bluish-green sprouts usually appear after 10 days. On the surface of the succulent leaves are tiny glittering under the solar rays of the glands.

The first few weeks, boxes of crops are kept indoors. Then gradually start hardening and transfer capacity to the room where the air temperature is above 18 degrees. Then drop to 10 degrees. After 3 weeks organize a pick of the seedlings in separate pots, where you pour a peat potting mix. Hardened seedlings of dorotheanthus less painful transplant will survive and adapt in the new environment.

The grown plants are watered carefully. Even a small amount of water trapped on the leaves and can cause burns. In late may, the seedlings transportyour on the plot with peat pots. The roots are not removed from the tank. The distance between the bushes should be 20 cm.

Often growers in order to save time the seeds are sown of dorotheanthus directly into the flower bed in the garden. Activities are carried out only after spring warms up the soil in April or early may. Flowering shrub in such a case is observed much later than the instances that are grown from seedlings.

For flower choose a lighted area where loose and lightweight substrate. To optimize the structure of soil, add sand. Dorotheanthus steadily growing on a light sandy or loamy soil. The level of fertility has no serious influence on the growth of perennial.

Because the succulent has very small seeds, prior to sowing, they are mixed with sand. Deepen the resulting mixture at 10-20 mm. Between the rows leaving a distance of 15-20 cm, to sprawling stems have enough free space.

When green shoots will appear above ground, plot weed, removing weeds. Even a small weed will prevent the development of bushes. In parallel, undertake thinning of seedlings. It is important that the distance from one plant to another was not less than 3 cm after some time the procedure is repeated, increasing the distance to 8 cm When the bushes will be enough forces, the succulents are transplanted to a new location, where they will live permanently. The final interval between the older and Mature shrubs observed within 15-20 cm.

Growing dorotheanthus in the garden 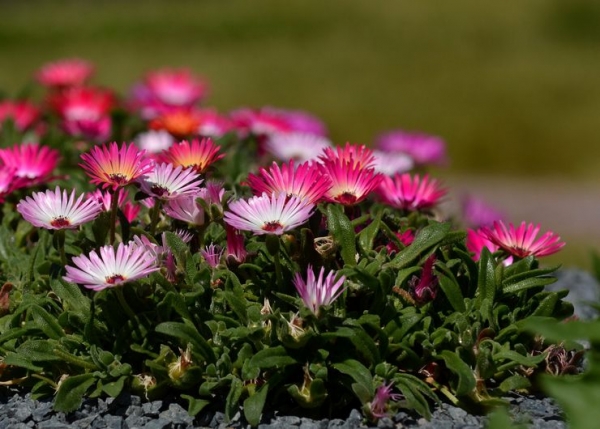 The plant prefers warm, Sunny weather. In case of cold weather, when the thermometer drops below zero, underground organs, like stems, at risk to die. Better to stick to the optimum temperature for cultivation of dorotheanthus – from 15 to 25 degrees.

Moisten substrate as needed. It is advisable to water the plant in the morning, but avoiding the hours of sun, to avoid overheating of the flower. In the evening, when the earth absorbs less moisture, watering to do also not recommended. Otherwise, the roots can stagnate fluid. If the stems because of the heat badly wilted, you still should wait until the morning and then water the Bush. Systematically watering the seedlings that were planted in the ground recently.

Dorotheanthus requires little attention. Fertilizing is rarely satisfied. This is due to the fact that a wild herb native to Africa, and there, as many know, drought is common. Therefore, the root system is compelled to provide themselves with necessary nutrients.

The full development of plants can be achieved only if the following conditions are met: 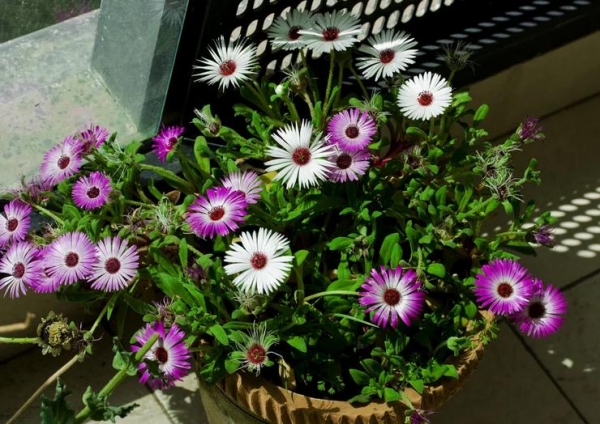 Dorotheanthus grown either in open soil or in pots at home. In the latter case the seedlings, which was to be relocated to the garden after the pick, you can try to grow at home. However, you need to create inside the certain conditions, i.e. as close to the microclimate on the site.

Consider the succulent will fit perfectly on a balcony or loggia. Area, where there will be a pot should be well warmed by the sun. More dorotheanthus growing on the balconies, which overlook the South side of the building. Winter room types «of poludenniy» in need of artificial supplementary lighting. Short daylight hours and lack of lamps cause problems with care at home. Weakened flower is unable to produce buds.

The types and varieties of dorotheanthus with photos 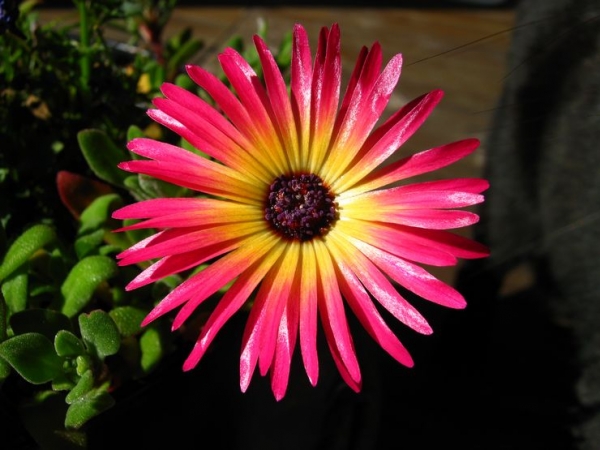 The wide popularity of the following classes: 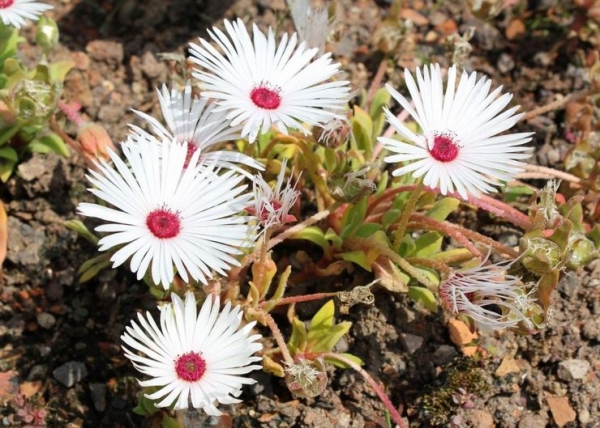 This species is only occasionally found in gardens of average climatic latitudes. Shoots much branched bushes. Length of leaves is about 4 cm, width 1 cm. the Central part of the flower catches the eye. The rows of petals are painted in soothing sudovye or red shades. 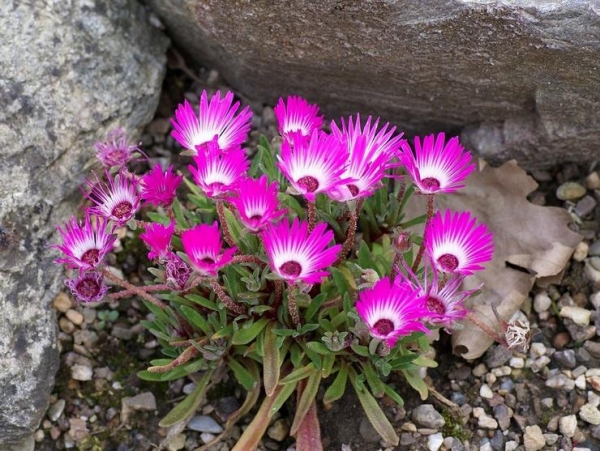 This kind of «poludenniy» consists of a branched reddish stems. The plant is stunted. Length not exceeding 10 cm, the Leaves elongated. Sessile leaf blades are covered with a thin stems. The diameter of the open Cup does not exceed 30-35 mm. the lower part of the petals is bright red. The tip of the Bud compared to the core looks lighter. Observed a pink or salmon hue.

Breeders bred these varieties of «crystal Daisy», which, even in partial shade until late in the evening do not hide their buds. We are talking about these cultural modifications: 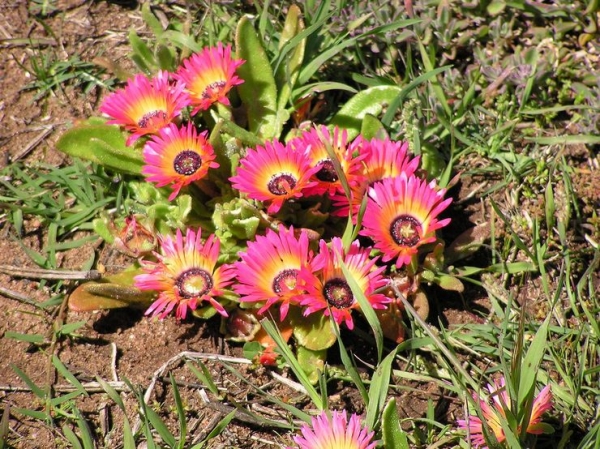 Belongs to the stunted representatives of the «poludenniy». Shrubs can boast a rich deciduous layer. The gardening is used in rare cases.

Flower suitable for garden cultivation and for cultivation in pots. In one capacity it is allowed to lower by 3-4 Bush. This perennial looks a winner, not only as an additional element. It’s easy to create a personalized floral arrangement. Against the background of many garden plants wither in July or early August, dorotheanthus has a significant advantage, namely, the flowering lasts until mid-winter.

A good idea would be planting a mixture of succulents along the borders, including dorotheanthus. When combining different varieties on the place of the dull gray areas will live «garland» of flowers. At noon, the borders will sparkle like a rainbow.

Despite the demand for dorotheanthus seeds «crystal Daisy» is quite difficult to find in regular flower shops.