How to feed tomatoes during fruiting?

Every gardener if he doesn’t, then at least realize that without extra effort to get a good harvest of large and tasty tomatoes is unlikely to succeed. Although tomatoes and belong to the group of vegetables with average nutritional needs, but taste and fruit size and yield of the bushes are largely determined by the additional fertilizer. And one of the important roles played by the feeding of tomatoes during fruiting. 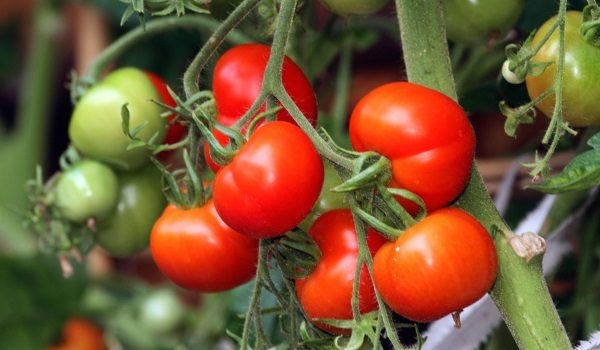 Why do I need to feed the tomatoes

Every gardener wants in the process of growing of horticultural crops to get a decent harvest. But is it possible to achieve this goal, without applying efforts, feeding and proper care. Many gardeners believe that a good harvest is the main fertile soil, but their opinion is not shared by all.

To get a decent harvest of tomatoes experienced growers believe that you must produce at least three of the fertilizing for the entire season:

Tip!During the ripening process, the plant takes from the soil a large amount of nutrients, so many recommend on the last stage to water the tomatoes with organic fertilizer.

In the process of all growth of tomatoes, starting with the planting in the open ground, tomatoes need useful trace elements and if that’s the bushes with tomatoes not provide, they will begin to fade, to be sick or even die.

To a greater extent nutrients need tomatoes grown in greenhouses. This is due to the fact that the greenhouse has high humidity and high temperature, this Bush increases the green mass, but it has a negative impact on the future results. In order to tomatoes in addition to green mass formed of the ovary, they need feeding not only on the plan (three times throughout the season), but also before flowering and during the fruit ripening stage. 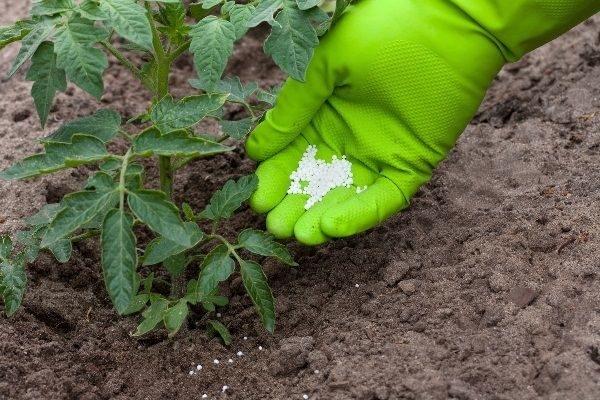 What elements need tomatoes during fruiting

The most important nutrients that are vital to tomatoes during fruiting, are phosphorus and potassium.

Potassium is necessary for tomatoes in any age, but especially during the pouring and ripening. He is responsible for productive capacity and immunity of tomatoes determines the taste and storability of fruits, and especially the content of vitamin C. due to the fact that potassium helps to speed up metabolism, its addition increases the quantity and quality of the ovaries reduces the time of ripening of the tomatoes. With a lack of potassium fruits have less sugar, they appear inside the voids on the surface and you can meet immature place.

Attention!In addition, the lack of potassium makes it difficult for nitrogen metabolism in tomatoes, increases sensitivity to disease, to lack of moisture and temperature extremes.

Despite the fact that the demand for phosphorus in tomatoes are much lower than in potassium, a deficiency can lead to the later formation of fruits and considerable reduction of their sizes. At earlier stages of development of tomato phosphorus helps develop the root system, the occurrence of earlier flowering times and the formation of ovaries. But still most of the tomatoes need phosphorus during fruiting. At this stage, the phosphorus promotes increase of yield and sugar content of tomatoes.

It is important at the stage of fruiting and to conduct additional feeding with calcium. As a result of a lack or poor absorption of this element there is a so-called «apical rot» of tomatoes.

The better of water and spray during fruit set?

Fertilizing tomatoes in the period of formation of the ovary may be accomplished by the following fertilizers:

It is also worth noting that the introduction of these fertilizers is carried out in two ways:

Please note! It is impossible to abuse the fertilizer, as excess of any component will also negatively affect the development of culture. 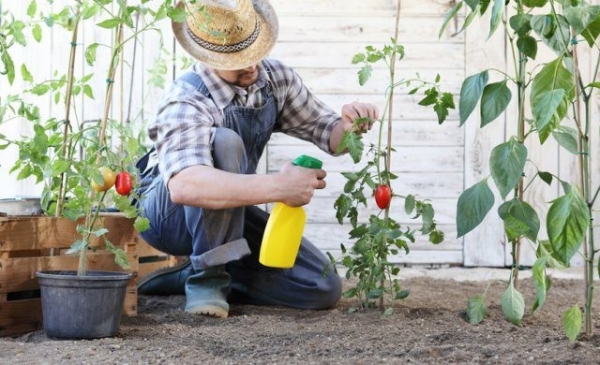 For some gardeners plant fertilizing chemicals is unacceptable, so they choose a folk remedy, which, as long experience shows, do a good job with the task. Consider the most common options:

At the stage of seedling, it is recommended to water every Bush a weak solution of iodine.

Preparation: for every 4 liters of water you must add 2 drops of iodine. 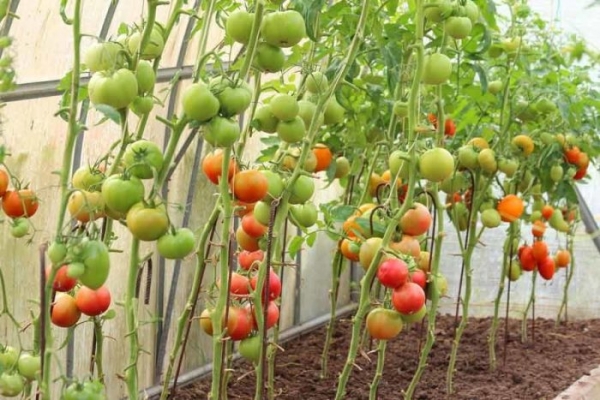 Fertilizing tomato fertilizers during the fruiting

Fertilizing tomatoes during the growing season is important. Mineral fertilizers there is a large range, but should choose the ones, which consists of potassium chloride. Thanks to him, increased chlorine content in the soil. This contributes to the death of the plant.

The use of mineral fertilizers at cultivation of tomatoes effectively. There are three of their kind:

phosphorus – essential for strong roots. These include phosphate fertilizer and super phosphate with a phosphorus content of not more than 18%;

nitrogen – used to stimulate the growth of green mass, contribute to improved vegetation and improve the taste. Here we are talking about ammonium nitrate, ammonium sulfate, urea;

Before application of nitrogen fertilizers in the ground you should add lime because ammonia feeding make it sour.

But there are drawbacks:

All drugs should be used in moderation, otherwise you may damage the root system of the plant.

The last 5 years well-proven complex of Kemira Suite. It dissolves completely in water and it has some of the necessary substances that require tomatoes during the growing season.

Effective «Senor Tomato», which is struggling with a lack of nutrients in the formation of the first inflorescence. In addition to the important minerals it contains nitrogenous bacteria. Humic acid included in the composition of the feed, improve the nutritional properties of the earth. But for foliar treatment of tomatoes it does not fit.

Complex «Effekton» made with a patented technology, whereby the peat is converted into nutritious compost. This became possible through the use of special bacteria. It includes also the phosphoric flour, oil shale ash, which feed the tomatoes minerals and organic substances. If you fertilize vegetable crops this drug during the growing season, the harvest will be rich. 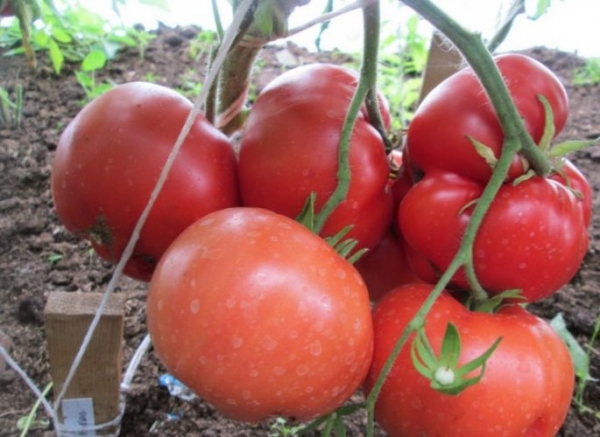 Those who do not accept the introduction of chemicals in the soil, it is recommended to use fertilizers of organic groups. They are no less effective than mineral, but have their advantages.

There are several types of such feedings:

Humates improve soil structure, and contribute to the development of the beneficial microflora. Thanks to these fertilizers to obtain high yields even in the poorest soils. You can use GUMI Kuznetsova, HUMATE Universal or Lignohumate. They are bred in water according to the instructions and watered the bushes by the roots.

Yeast is a simple and very effective fertilizer. It helps to catch up to the growth of a plant, which bore a long time to acclimatize to the new soil before transplanting or which were originally very weak. The action of the drug lasts up to 4 weeks, depending on the concentration and availability of organic matter in the soil. Method of preparation: 100-150 g fresh yeast dissolved in 1 l of warm water. After the start of fermentation, the solution is poured into 10 liters of water and pour the tomatoes at the very root, so that the solution does not get on the leaves and shoots.

Ash is not only a source of calcium, phosphorus and magnesium, but also an effective remedy for many pests of Solanaceae. Wood, treated (painted, varnished, glued), not suitable Fertiliser tomatoes was carried out as an organic substance in dry form and diluted in water.

Iodine — a great tool for flowering tomatoes. It promotes friendly flowering and rapid fruit set. On 10 l of water with a pipette measure out 6-8 drops and mixed with 0.5 l of normal serum. The resulting solution poured over the seeds. For foliar treatment taking no more than 30 drops of the substance and breed them in 1 liter of whey, There also add 1 tbsp of hydrogen peroxide. All this is diluted in 10 liters of water and sprayed the leaves of tomatoes.

Infusion of herbs is one of the means to fertilize tomatoes. Any weeds not yet entered the flowering stage, finely whipped with a shovel or cut with scissors. After it is placed in a barrel, bottle or any other container 1/3 of the total. All this is filled with water and left to ferment in the sun for 10-12 days. Box of 1 liter of tincture is mixed with 9 liters of normal water and watered the bushes (1-1. 5 l each).

Boric acid enhances the formation of flowers in the greenhouse and accelerates the process of fruiting. In 10 liters of water diluted with 2 tbsp. of boric acid, and then feed the plants at the root.

Organic fertilizers are applied and how monopolarity, and combining. Contrary to popular belief that natural substances in excess can harm the process of fruiting, fertilize them planting should moderate. Excess leads to stunted growth of bushes, and to fall the ovaries.