This plant belongs is beautiful vallota or Scaborough lily. Thanks to its unique individuality and relatively easy for him to care, this flower has gained wide popularity among gardeners — it can often be found at home. 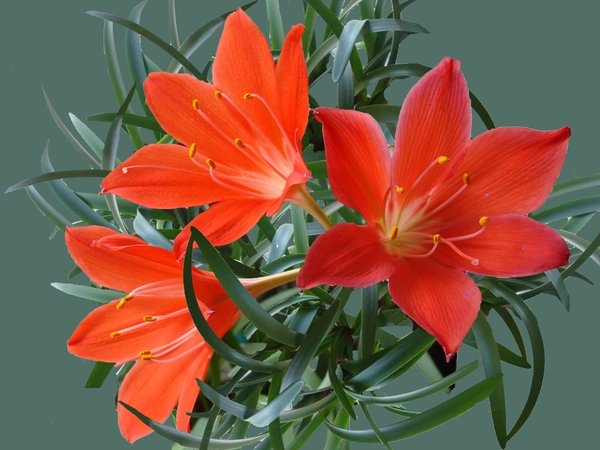 Scaborough lily or Vallota – deciduous bulbous plant with quite large, dark green leaves, from a quarter meter to 40 cm long, collected in the rosette shape of a fan.  It is painted in bright purple tones at the base. This plant with a bulbous base, the neck of which is so massive that it is hard to determine where it ends and begins the stalk.

Blooming, with good care happens twice a year — the first time in the summer, and then autumn. Peduncle leafless, hollow, forms from two to nine bright red flowers in the form of bells or funnel-shaped. Eventually, the flowers turn into fruit – boxes, which ripen before the seeds.

Scaborough lily which forms daughter bulbs on the soil surface. Over time, they formed roots and children of the parent plant begin an independent life.

Vallota beautiful can not be attributed to the order of cranky, but still worth to know about his preferences, to provide him with proper care, otherwise the cultivation will be associated with constant problems, which should not be. 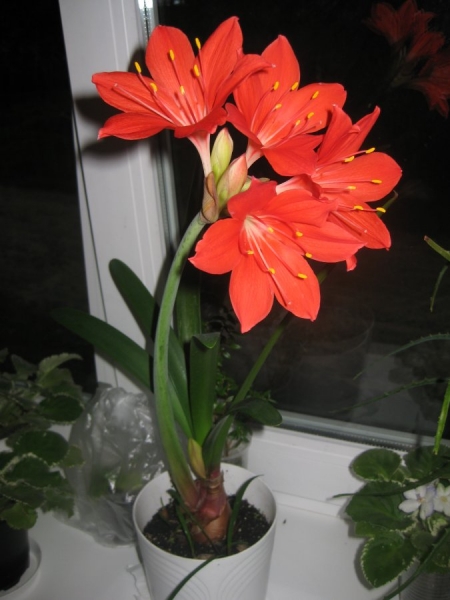 Lighting. At home, the flower develops well only if a sufficient number of bright natural light. This should be taken into account in its location. It would be best to put it on the window sill, facing South-East or South. However, in the latter case, it will have slightly shadow, especially in the hottest summer days, otherwise burns may result.

Temperature. Despite replaybility, Scaborough lily loves moderation. Optimal temperature is 20 — 25°C during the active growing season, from spring until mid-autumn, but in winter it is desirable that the temperature was somewhat lower, about 10 — 12°C.

Flower will survive and lower, but not below +5°C, otherwise he will catch a cold and be gone.

The atmospheric humidity. As for humidity it is desirable that it was reasonable, but in hot weather, flower need a regular spray from a garden sprayer, but very carefully, because large drops remaining on the leaves, and especially on the colors, will inevitably lead to the reduction of decorative plants. Therefore, in the flowering period the procedure of wetting will be better to replace damp wiping. In addition to the necessary moisturizing, RUB leaves a damp cotton cloth will maintain the decorative qualities of the flower.

Scaborough lily is a plant with a bulbous root system and are therefore very sensitive to water stagnation. Therefore, irrigation should be taken seriously. As the lack and excess of moisture is guaranteed to lead to problems. The standard for watering flowers grown in home – watered, waited, when will dry out the top layer, poured again. Moreover, it is worth considering temperatures in colder periods the moisture evaporates longer, so watering should be less abundant, but not more rare.

Will not be superfluous to throw in a flowerpot with a drainage layer that will protect the plant from water stagnation and root rot fungus. For this, before laying the feed soil to the bottom of the pot is to put a 4 to 5 cm of pebbles, and better expanded clay mixed with washed river sand.

The composition of the nutrient substrate. Scaborough lily great at home, however, as in nature, is a fast developing and flourishing. Accordingly, it requires a sufficient amount of nutrients, which need to provide a soil so light and sandy compositions will not be enough. Composition about the following – 4 pieces of leaf, 2 parts humus and a little river sand. Most importantly, all carefully mix to a homogeneous mixture, moderately nutritious and at the same time breathable.

Feeding. This flower does not tolerate poor soils, so its cultivation in home conditions is impossible without regular feeding. She needed a flower during the active growing season, from early spring until mid autumn after which the plants need winter rest. At this time feeding is not only undesirable, but harmful.

Spend feeding at least twice a month, by introducing into the ground liquid, ready formulations for houseplants. In this case, you need to spend watering and only then to make fertilizer, otherwise there is a high probability that the dressing devour the roots.

Transplant. This procedure should be done only when absolutely necessary, as all bulbs do not respond well to moving to a different location. The slightest damage to the follicles can lead to rotting and death of the plant. Transplant necessary in the case when the follicle becomes crowded in the old pot, but the daughter bulbs, you need to transplant immediately after their appearance, otherwise they take nutrients from the mother plant and drain it.

At home, lilly propagated by seeds and vegetatively – nursery cuttings or by dividing the bulbous root. 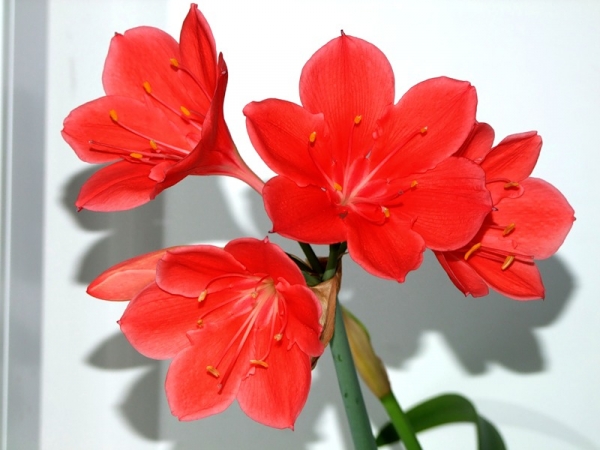 Less likely to use reproduction by division of the bulbs that can be used by experienced florists.

Office children. The most simple and effective way is rooting children. With good care, mother bulb produces enough of them. They are separated in the spring, at the time of revival of a plant from its winter sleep. When separated, it’s better to check children of the root system, it is not, they are not ready for independent development, such children rarely survive. Ideally, the cuttings must separate from the mother’s legs, but quite acceptable and artificial their separation – in the presence of roots, they are well acclimatized to the new place and give rise to a new plant.

Seed propagation. First you need to get the seeds. To do this, grow on a Bush seed pods – leave one, the most healthy and large. At the moment when it cracks, it’s time to collect the seeds – they are ripe. Immediately after collection, they should be sown, as long they are stored each week the percentage of germination is greatly reduced. Latest sowing time is January, but it would be better to do it between September and October.

Seeds are sown in moist peat substrate and arrange over the hotbed greenhouse. Care for the seedlings is to maintain constant humidity and temperature, in the range 16 to 18°C and regular airing. By following these recommendations, seedlings appear within one month, and six months later they need to dive. Select the most healthy and tall plants and transplanted, each in a separate pot so that the neck of the bulb was on the surface.

For seedlings need constant and careful care is necessary to control the humidity, temperature and to monitor them, the first 2 years does not get direct sunlight. In warm weather, optimum temperature – about 22°C, in winter around 16°C, and very importantly, being in the fresh air. If all goes well, the seedlings are already in the third year will produce its first flowers.