Japanese Euonymus (Euonymus) is a plant of the family Bereskleta. In natural conditions it grows in deciduous and mixed forests in the subtropics or in areas with a temperate climate of the Northern and southern hemispheres. Japanese Euonymus is not found in the far North and in the tropics. Grow it in the garden or in the Park and at home as an indoor or greenhouse flower.

Japanese Euonymus foliage, evergreen plant with beautiful two-tone leaves and small flowers that appear in mid-summer. Flowers of Euonymus is insignificant, but the fruits are like small, pink lanterns. Fruits with seeds ripen towards autumn. 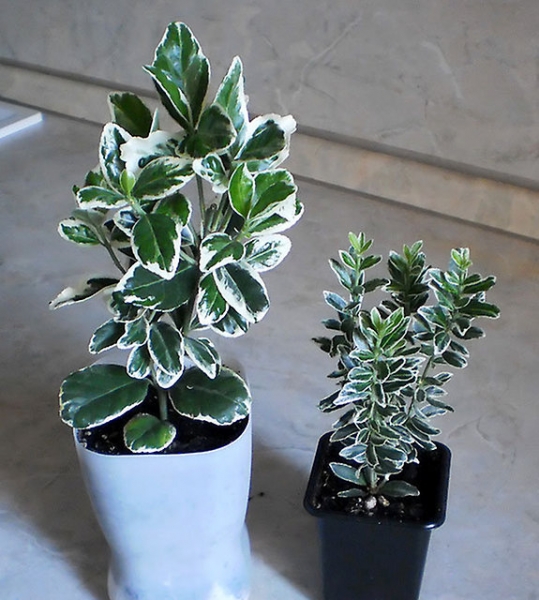 The leaves of the plant look more decorative than the flowers, they are thick, glossy, with serrated edges, have the original colorful color – yellow-green, gray-green, dark or light and bright. Gardeners brought several new varieties of Euonymus, with different color and shape of leaves.

In vivo Euonymus can grow to 7 metres in height, in garden culture to 2-3 meters, well, and room Euonymus does not exceed 60-70 cm in height.

Japanese Euonymus don’t care, but if growing conditions in your garden he doesn’t like it, it will grow only in early spring. The rest of the time of shoot growth will not happen.

Usually, the increase occurs for two periods in the season, and with good care in the garden during the year, the Japanese Euonymus grows to about 15-20 cm At the end of the period of growth of Euonymus on the tops of the shoots appear with cones scales is buds with them in the beginning of the next period of growth will be new leaves.

These features of the development of Euonymus must be considered for proper care of him, at the beginning of the period of active growth, fertilize it with nitrogen fertilizer, then integrated, and during the formation of a new renal – potassium-phosphorous. 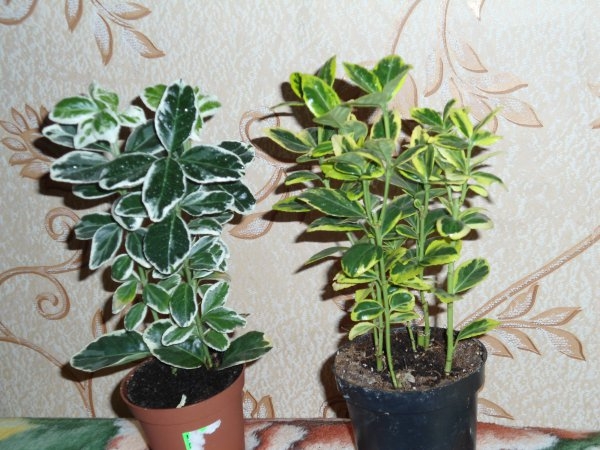 During the rest period, stop fertilizing, and watering is carried out only in order to prevent drying out of the soil. After the active growing season the plant goes dormant and stops growing. This also applies to room bereskleta, and green varieties.

Caring for Euonymus in the garden begins with planting. To do this, prepare the soil mixture of leaf compost, turf, peat and sand, in which turf should be two parts, and other components in one piece. However, the Japanese Euonymus is not demanding to soil, for growing ordinary garden soil with added sand. If the soil is too acidic, making lime.

In hot weather watering the Euonymus combined with spraying with water from a hose, but this should be done before or after sunset, if there was a solar burn.

Japanese Euonymus grown in the garden are propagated by dividing the Bush, cuttings and seeds.

The shrub can be divided in early spring before the beginning of the period of active growth. From the parent hive separated 1-2 escape together with the roots and planted in the previously prepared place. When planting, the stem is cut to a height of 20-30 cm, to reduce the load on the roots. New shoots will grow from the stem or from the roots.

For the propagation of Euonymus cuttings, cut them with the young shoots in June-July. The cuttings should be up to 6-7 cm, with at least one internode, before planting they were treated with a vehicle for the development of the root system. 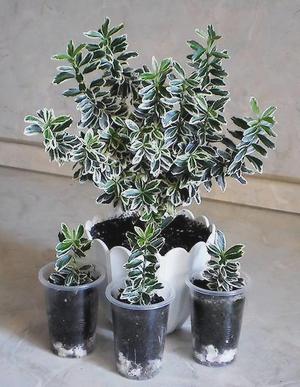 Cuttings root in a mixture of turf and leaf earth, humus and sand. The root stalk is 1.5-2 months and then planting in a permanent place, in this case a new plant creates the necessary conditions and provide attentive care.

Propagation of Euonymus seeds collected last year occurs in the summer. Before planting them strategicgrowth at a temperature of 2-3 degrees within 4 months. As a result of the stratification they should burst the skins, it will say that they can be sown. The seeds finally freed from the rind and 1-2 hours soaked in pink solution of potassium permanganate.

Then they are sown in containers with moistened potting mix, and covered with a transparent cover. After emergence from cover refuse, tempering plants at normal temperature and lighting. In open ground the young plants are planted the next year, and before that they create the desired temperature in the home. Before planting in a permanent place in the garden plants harden for 2-3 days, leaving under the open sky.

There are several cultivars of Japanese Euonymus, which can be grown at home as the flower room:

Japanese Euonymus in the home is best grown in a well-lit place in the room on the South side – it is equally well will feel under direct sunlight and under diffused light. 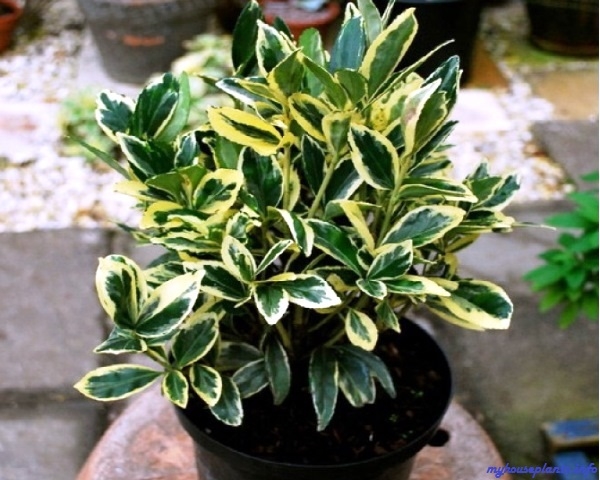 With the onset of summer, the flowerpot can be put on the balcony or on the veranda or in the yard. Do not forget that this is a houseplant, you can’t put it under strong sunlight, getting used to it gradually. Caring for Euonymus at this time should consist of watering and spraying in the morning or evening.

As for temperatures, it should be not below +5-10 degrees in winter and no higher than 25-30 degrees in the summer. In the winter of Euonymus, a period of rest, and if you keep it in a warm, heated room, it will start to drop leaves.

Caring for potted Euonymus is watering and feeding, which is especially necessary to the plant during the period of active growth. Buds, which will develop over time, inconspicuous flowers, you can delete immediately, so the plant does not give them nutrients.

For planting Euonymus in the home is a mixture of humus, turf and ground sheet with the addition of river sand. Another option of fertile soils and loam with peat and sand.

Favourable conditions and good care contribute to good development of potted Euonymus, therefore, to transplant it each year at a young age, and every 3-4 years in «old» age.

Japanese Euonymus growing in the home, in the spring and summer feed every 20-30 days with mineral and organic fertilizers. Winter dormancy feeding and frequent watering is not needed.

Japanese Euonymus must be regularly cut to form a beautiful crown. When pruning, remove weak, small shoots and shoots growing inside the crown. For intensive tillering shoots pinch.

This plant is best suited for the formation of bonsai, its lush branches easy to give any shape to take the form of a cone, bowl, figures animals.

Caring for potted Euonymus includes activities for the protection from diseases and pests. At home, the plant gets sick Botrytis that makes the leaves appear grey tinge and brown spots. As for insects, often harmful to the plant scale insects and spider mites. Both problems are solved by spraying chemicals, which can be purchased at the flower shop.

Propagated potted Euonymus as well as garden plant – from seed, cuttings and division of the Bush.