How to grow peanuts?

Think the peanut is one of the most versatile products. It can marinate for a snack. Salted peanuts is also appreciated by many. Oil it can squeeze out. The peanut paste in the confectionery industry is widely used as roasted seeds. And, in General, you can add it to salads, appetizers, first, second dishes and dessert — all delicious! It turned out to be not all its wonderful possibilities. As for the benefit of themselves and for other plants to grow peanuts, will discuss in this article. 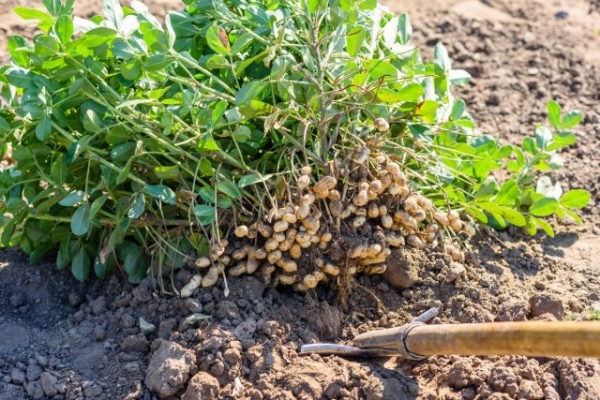 What kind of plant is a peanut?

Very even and not a nut, but a legume with seed pods (beans), which contain the seeds, incorrectly called nuts. But it so happened that everywhere it is called ground-nuts.

The birthplace of peanuts – South America. And from there efforts, for the most part, of Spaniards and Portuguese, peanuts spread to other continents. Considering his origin, he loves warmth, sun and a moderate amount of moisture in the soil.

Grow a peanut Bush, 30-50 cm tall (sometimes to 100, but it’s not us). Quite a normal beans with a distinctive yellow flowers, and will not suspect him in any pitfalls. And he – Bang! And fruitlets pushes into the ground, tilting this purpose branches down. Perhaps there, in South America, many young fans of beans and have them immediately to hide. And most likely, peanuts at no one expects the distribution of seeds and planting them yourself.

The process of «pushing the ovaries into the ground» is very curious. The first time I became interested in school, have planted a seed of peanut in flower pot with loose soil and every day, tracked all stages of growth and development. About selfing I didn’t, but fortunately for me, the plant did it itself.

After flowering, the flower stalk started to fall to the ground and stuck. Nothing more interesting on the surface did not occur. When the leaves began to dry, I poked in the ground and on the former peduncles found on the pod with two nuts. 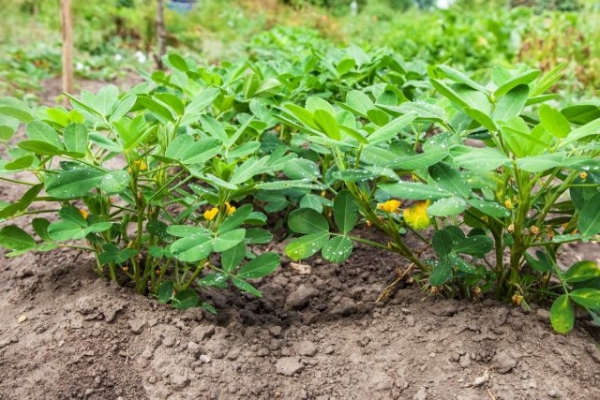 It is clear that for many years kultivirovanija created varieties of peanuts, suitable for different conditions and giving different size, density, sweetness and oil content of grain. Mostly they have a long vegetation period and high demands on the heat.

In General, in Russia peanuts in the open ground can be grown from the breadth of Rostov and to the South. It’s in an industrial variant. In the Amateur – where eggplants grow there and the peanut will grow. And in the greenhouse it will not be superfluous.

Peculiarities of cultivation of peanut

To grow the peanut better seedling method, sowing in cups 1-2 seeds. Shoots appear after 2 weeks, bloom again in 3 weeks, by this time, it is desirable to plant in the ground. The more heat and sun, the better growing and fruiting plant.

To the soil the peanut is unpretentious, the main condition – it should not be sour and loose, and that he will push back their hinotori? Waterlogging contributes to various diseases and rotting of the pods, so it is better to dry than to pour.

As the fruiting of peanuts will capture the surrounding territories, to put it preferably at a minimum distance of 40 cm from each other.

After flowering is recommended to hill – the land is loose and closer to the buds. Not to overexert, and then bloomed. Spud in a season several times.

When the leaves start wilting, you can try to dig up fork Bush and see what’s there? Further on the situation: if rainy and humid, it is better to dig, if it’s dry – let it sit until the last, that is, before lowering the temperature to +5 °C.

After digging dry well, put them into mesh bags and hang higher in the draft that no Thrifty animals never made it there.

My experiments with peanuts

All that is written in the section «Varieties and growing conditions» I learned once grew peanuts on a bed. Seeds I didn’t even look, I had a little fried, and a half-eaten son of peanuts purchased on the market in Goryachy Klyuch (Krasnodar Krai, we’re now living) – large and small. Soak them in warm water and changed every day because of the appearance of mucus. Three days later, they were pecking.

The bed is not prepared, it seemed to me that early determinate tomatoes I planted quite freely, and I povtykat grain of peanuts between them. Much of the neighborhood with legumes worse they just should not be, and the benefits can happen.

The beds we since living in the Khabarovsk region do fenced, raised above the soil 20 centimeters. The soil we have clay, very dense, therefore when forming the beds nothing perekidyvaem, put the box on the grass, covered with cardboard, place small woody debris (bark, branches, sticks), leaves and shells from under the hazels, sprinkling the ground from the drainage ditch. In the spring, again adding dry leaves with grass and shed solution uh. The actual land there is little. I planted seedlings of tomatoes and beans peanut in the beginning of may. Day two found zamulchirovat the whole bed of freshly cut grass and all the spring concerns about peanuts safely forgotten.

Came back to her in two weeks, throw another fresh cut grass. And then between the tomatoes found typical boring beans. We had to pay attention to them: I planted generously, 3-4 pieces in the hole, they all went up. Sorry, but pulled out the excess, put right there under the tomatoes.

Then during the summer I put the grass as mulch, a few times the husband has watered the whole bed – the summer was dry. And sprawling stems of tomatoes laid out on the roll beds below the peanuts, too, the sun got it. Although there is little that he got it – it is really good for tomatoes was next to peanuts, they grew in all directions and fruited profusely until frost.

The first Bush peanut pulled out randomly in August, the harvest was modest. But it was! And I thought tomatoes it finally strangled. The rest of the peanuts pulled in October, when digging the sweet potatoes. The soil is loose, on top of the grass and Bush along with the beans are easily pulled out. With 6 bushes, I turned 1.5 kg of beans. For such «straitened» circumstances is a good result.

Peanuts hanging next to the sweet potatoes scattered on papers in a thin layer. How much is stored – I don’t know, we ate it for a month.

The following year, trusting more determinate tomatoes planted sprouted grain peanut for strawberry. It is hoped that then the peanut certainly more sun will get. For all my manipulations watched Jay, with stone steps on the slope. I thought she was with good intentions…

All became clear when after a week, mulching strawberries with grass and dig deeper in the ground (surprisingly loose in places landing!), I have not found any nuts. Because the whole peanuts in the house by this time was eaten, and the time lost, last season, peanut experiment failed miserably. 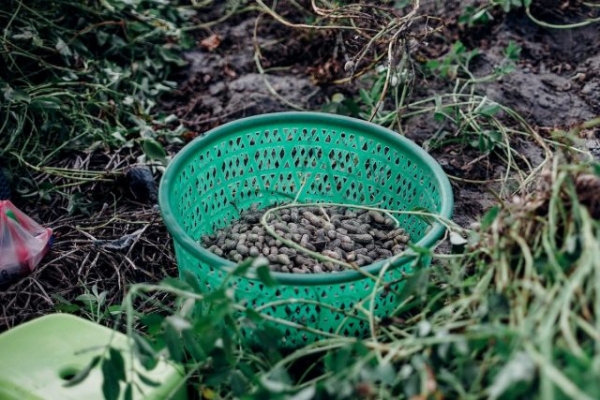 Use peanut for joint planting with potatoes and tomatoes

It turned out, about the common of landings is not one I such clever. In 2006-2008, in the Voronezh region conducted the study of the mutual influence of plants by joint planting of peanuts with tomatoes and peanut potatoes. The results are very interesting:

That is peanuts by their presence (legumes too!) able to significantly improve the sustainability and productivity of vegetable crops. And a crop of peanut is an added bonus.